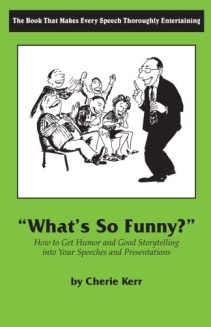 What’s So Funny?: How to Get Humor and Good Storytelling into Your Speeches and Presentations Paperback – June 15, 2000

More about the author

Kerr has also provided a number of classes to various universities and collegiate departments including Chapman University; Otis College of Art and Design; University of Southern California; California State University, Fullerton; Vanguard University; University of California, Irvine, The Paul Merage School of Business; UCI Medical Center, Anesthesiology Department; the U.S. Naval Academy at Annapolis; and the U.S. Military Academy at West Point. She also has worked for a number of governmental agencies including the L.A. City Attorney’s Office, the L.A. District Attorney’s office, the County of Orange, the Orange County Bar Foundation and the Orange County Juvenile Drug Court Program. She is a certified Provider for the Continuing Legal Education Program for the State Bar of California, and has served as that organization’s official speaker-trainer for its Board of Governors.

A founding member of the world-famous L.A. Groundlings, Kerr was the founder in 1990, Executive Producer and Artistic Director for the Orange County Crazies, a sketch and improvisational comedy troupe in Santa Ana, California. She also served as the group’s head writer. She has received rave reviews for her work as a writer, performer and director.

Kerr has taught improvisational comedy to actors since 1973, and teaches other classes as well, including a class on how to develop original characters and how to write sketch comedy. She has studied with some of the best improv and comedy teachers in the business, including Kerr’s former scene partner, Gary Austin, founder of the L.A. Groundlings, and a former member of the highly acclaimed group, The Committee; Michael Gellman, a director and teacher for Second City, in Chicago; and Jeannie Berlin (an Academy Award nominee and Elaine May’s daughter.) In her formative years, she studied at the Pasadena Academy of Drama with Eleanor Dopp.

A writer for more than 35 years, Kerr has owned an award-winning public relations firm since 1978, KerrPR, that offers public relations services to a variety of clients. She handles many crisis situations and is regarded as a prime source by media (such as Good Morning America, Entertainment Tonight, Larry King Live, CNN, 20/20, The Today Show, Anderson Cooper 360º, The Sunday Show, Nightline and many others) to provide them with expert sources for commentary.

Kerr has written, produced and directed an original full-scale musical comedy, written two full-length screenplays, 11 books and more than 400 comedy sketches; she is a member of ASCAP, and has been honored as an award-winning journalist and publicist. Kerr was named, along with Disney’s Michael Eisner, as one of the “Top Ten Most Sensational People in Orange County” by Orange Coast Magazine. She has been quoted and featured in many publications including the OC Register, The Los Angeles Times, the Harvard Review Communication Newsletter, Forbes, American Way magazine, the Sacramento Bee, USA Today, The New York Times, Investor’s Business Daily and The Associated Press, in addition to many others. She also did an AOL radio tour on email etiquette and has been featured on numerous websites. She also is the mother of award-winning filmmaker, Drake Doremus, winner of the 2011 Sundance Film Festival U.S. Dramatic Competition award for Like Crazy, a fully improvised film (based on a 50-page outline and sold to Paramount Pictures for $4-million); Doremus performed on Kerr’s improv/sketch stage from age 6 to 19 years old. She is currently in the works of directing and editing her first film, “We’ve Got Balls,” a quirky, yet heartwarming dark comedy expected to finish early 2013.

Kerr also starred in her own one-woman show, Out of Her Mind, which met with great success and which she single-handedly wrote. In it she played a number of original characters.

In addition to lecturing and teaching ExecuProv courses, both in classroom situations and in private, one-on-one coaching sessions, Kerr provides speechwriting services for many of her clients. Kerr also provides her creative services to large companies for corporate comedy industrials and also produces ExecuProv’s Humorous Training Video Library, a diverse library of video spoofs designed to train the business professional in a fun and humorous way. Companies and individuals access the HTVL catalogue with a library card, which gives them rights to include the humorous videos in their presentations, adding that extra dash of humorous panache.

Kerr is frequently sought out as a keynote speaker addressing presentation and communication skills and humor in the workplace, and is also available for speaking engagements.

Cherie Kerr resides in Santa Ana, California. She is the mother of three and also has five grandchildren.