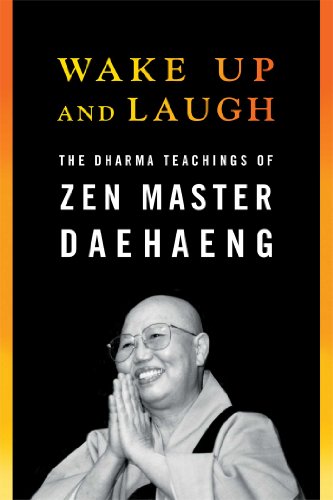 Wake Up and Laugh

Wisdom, warmth, and humor from a renowned Zen Master.

The compassion, humor, and practical intelligence of one of Korea’s foremost Zen masters shines throughout this new collection of Dharma talks. On each page, Master Daehaeng reveals how everything in daily life, even the ugly and difficult parts, can become the fuel for our spiritual growth. Her illuminating insight will guide the reader toward an understanding of her ultimate teaching—know yourself, trust yourself, and go forward, no matter what your current life situation might be.

At turns laughing and scolding, always engaging, Zen Master Daehaeng exhorts, cajoles, and instructs readers in their practice. These Dharma talks—gathered over several years—are like having Master Daehang at your side, urging you on.

The question-and-answer sessions with students are particularly enlightening; readers will find that the students’ questions mirror their own and that Master Daehaeng’s responses guide them on.

Editorial Reviews
Review
“Daehaeng Kun Sunim’s ability to reach out to a wide audience of both ordained and lay Buddhists is well documented. Her method of teaching is disarmingly simple, yet remarkably profound. She is widely known for her insight into people’s character and her ability to draw on that insight to craft teachings that correspond precisely to the needs of her audience. No River to Cross organizes Daehaeng Kun Sunim’s teachings in a way that is readily accessible to scholars and students alike. Daehaeng Kun Sunim emerges in this collection as one of the most creative and accessible of contemporary Korean Buddhist teachers, capable of using even the most mundane of daily events as grist for the mill of Buddhist teaching and practice.” (Robert Buswell, director of the Center for Buddhist Studies, UCLA, from his foreword,)

“No River to Cross gives us a strong voice, at times astonishingly direct; a balance of clear explanations of the complex terms and concepts of Buddhist practice with precise, perfectly chosen, illuminating examples, and a striking relevance for today’s world.” (David McCann, recipient of the Manhae Prize for Arts and Sciences, and director of the Korea Institute at Harvard University)

“No River to Cross speaks directly and simply from the heart, much in the manner of Shunryu Suzuki’s Zen Mind, Beginner’s Mind. Master Daehaeng’s ability to penetrate the skin with plain and pointed words should give this work the same longevity.”
(Francisca Cho, Georgetown University, translator of Everything Yearned For)

“This first taste of a fresh female voice leaves you hungry for more.” (Shambhala Sun)

About the Author
Daehaeng Kun Sunim was one of the most respected Buddhist teachers in Korea. While most Korean Zen masters have traditionally taught only monks and perhaps a few nuns, Daehaeng Kun Sunim was determined to teach spiritual practice in such a way that anyone–regardless of their occupation, gender, or family status–could practice and awaken. With this in mind, in 1972 she established Hanmaum Seon Center as a place where everyone could come and learn about their true nature and how to live with freedom, dignity, and courage. The center has gone on to emerge as one of the most influential Korean Buddhist centers today, with over fifteen domestic branches and nine overseas centers. Daehaeng Kun Sunim is the author of No River to Cross. She passed away in May 2012.

Excellent and superb written. This is ( or was?) a true great master of the real Zen. Just as good as any of the original Chinese Chan masters and old Japanese Zen masters