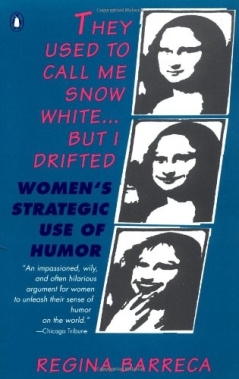 They Used to Call Me Snow White…but I Drifted

They Used to Call Me Snow White…but I Drifted: Women’s Strategic Use of Humor Paperback – April 1, 1992

Artfully combining sociology, psychology, and feminist theory, here is a fascinating and entertaining look at how women can use humor to their advantage. This witty–and at times deliciously ribald–book examines women’s humor and shows how the proper punchline can work wonders on the street, in the bedroom, and even in the corporate boardroom.

Despite a tendency to make sweeping generalizations about both sexes, Barreca offers illuminating analyses of humor as a weapon and of the Good Girl/Bad Girl dichotomy in books, movies and TV.
Copyright 1992 Reed Business Information, Inc.

Barreca, editor of Last Laughs: Perspectives on Women and Comedy (Gordon & Breach, 1988), explores the relationship of women and humor. She discusses the differences between men and women in how they use humor, what they think is funny and how they are perceived when telling jokes. Giving the book a strong feminist bent, Barreca theorizes that women are not encouraged to be funny and are even perceived as “bad girls” if they are funny. She quotes extensively from other researchers in the field, as well as from comediennes, authors, and cartoonists. Her coverage is extensive, ranging from Mae West to Sandra Bernhard, Emily Bronte to Erica Jong, “I Love Lucy” to “Designing Women.” The added bonus is the wealth of humor included as examples in the book. Recommended.– Kathy Ingels Helmond, Indiana Univ.
Purdue Univ. at Indianapolis Lib.
Copyright 1991 Reed Business Information, Inc. –This text refers to an out of print or unavailable edition of this title.

More about the author

Deemed a “feminist humor maven” by Ms. Magazine and “Very, very funny. For a woman” by Dave Barry, Gina Barreca is most recently the author of It’s Not That I’m Bitter: How I Learned to Stop Worrying About Visible Panty Lines and Conquered the World (St. Martin’s, 2009/ppb. 2010). She has appeared on 20/20, 48 Hours, NPR, the BBC, The Today Show, CNN, Joy Behar, and Oprah to discuss gender, power, politics, and humor. Her earlier books, include the bestselling They Used to Call Me Snow White But I Drifted: Women’s Strategic Use of Humor, as well as Perfect Husband and Other Fairy Tales: Demystifying Men, Marriage and Romance, Sweet Revenge: The Wicked Delights of Getting Even, and Babes in Boyland: A Personal History of Coeducation in the Ivy League; her books have been translated into several languages, including Chinese, Spanish, Japanese, and German. She’s the editor of seventeen books, including The Signet Book of American Humor and The Penguin Book of Women’s Humor as well as The Erotics of Instruction and A Sit-Down With the Sopranos. She writes for the “Brainstorm” section of The Chronicle of Higher Education and blogs for Psychology Today, does a weekly column for The Hartford Courant, a monthly column for Principal Leadership, and occasionally spars with her former co-author (of I’m With Stupid: One Man. One Woman. 10,000 Years of Misunderstandings Between the Sexes Cleared Right Up) Gene Weingarten in his “Below the Beltway” column in The Washington Post. With degrees from Dartmouth College, Cambridge University, and the City University of New York, Barreca is Professor of English and Feminist Theory at the University of Connecticut.

Not only can Barreca take a joke, she can masterfully script her own making the reader laugh out loud at the comedy and complexity of the gender roles – both male and female – we think we lead, but which in fact often lead us. In “They Used To Call Me Snow White… But I Drifted” Barreca makes public many of the private joys, hypocrisies and trials of women’s humor in an honest and frank manner. But make no mistake: behind her comfortable writing style lies a poignancy, wit and substance that raises the stakes. Reading “Snow White” is like sitting down at the kitchen table with your funniest (and smartest) aunt and being let in on all of life’s best and naughtiest secrets. Simply put, Regina Barreca gets it.