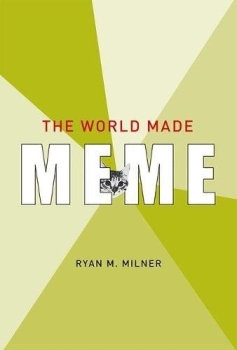 The World Made Meme

How memetic media — aggregate texts that are collectively created, circulated, and transformed — become a part of public conversations that shape broader cultural debates.

Internet memes — digital snippets that can make a joke, make a point, or make a connection — are now a lingua franca of online life. They are collectively created, circulated, and transformed by countless users across vast networks. Most of us have seen the cat playing the piano, Kanye interrupting, Kanye interrupting the cat playing the piano. In The World Made Meme, Ryan Milner argues that memes, and the memetic process, are shaping public conversation. It’s hard to imagine a major pop cultural or political moment that doesn’t generate a constellation of memetic texts. Memetic media, Milner writes, offer participation by reappropriation, balancing the familiar and the foreign as new iterations intertwine with established ideas. New commentary is crafted by the mediated circulation and transformation of old ideas. Through memetic media, small strands weave together big conversations.

Milner considers the formal and social dimensions of memetic media, and outlines five basic logics that structure them: multimodality, reappropriation, resonance, collectivism, and spread. He examines how memetic media both empower and exclude during public conversations, exploring the potential for public voice despite everyday antagonisms. Milner argues that memetic media enable the participation of many voices even in the midst of persistent inequality. This new kind of participatory conversation, he contends, complicates the traditional culture industries. When age-old gatekeepers intertwine with new ways of sharing information, the relationship between collective participation and individual expression becomes ambivalent.

For better or worse — and Milner offers examples of both — memetic media have changed the nature of public conversations.

Beneath every meme is a sophisticated confluence of language and culture, practice and participation. In The World Made Meme, Milner reveals the complex socio-technical work that goes into memes, highlighting their cultural and political importance. This digestible analysis is a significant contribution to the field of internet scholarship.

The World Made Meme is an exciting book because it fits on a number of shelves (or syllabi). Not only is Milner’s analysis of memetic logics invaluable to internet scholars, it is equally applicable to embodied texts and traditions–making this a fascinating read for anyone interested in vernacular communication.

(Whitney Phillips, Assistant Professor of Literary Studies and Writing, Mercer University; author of This Is Why We Can’t Have Nice Things)

Ryan Milner gives us a terrific, in-depth exploration not only of memes but of the rich social processes through which they arise and are sustained. Through his insightful analysis he shows us how they form a critical node in participatory media, offering both systems that perpetuate ‘everyday antagonisms’ as well as hopeful rebuttals. Anyone interested in understanding the role, and power, memes now hold in our culture should read this book.

Ryan Milner is Assistant Professor in the Department of Communication at the College of Charleston.