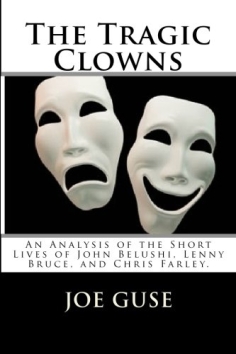 The Tragic Clowns: An Analysis of the Short Lives of John Belushi, Lenny Bruce, and Chris Farley. Paperback – October 17, 2009

This book provides a psychological profile of John Belushi, Lenny Bruce, and Chris Farley, and attempts to examine the pathos that exists in the inner worlds of comedians.

Interesting connections in this book. Although each of these men died from drug overdoses, each had childhood patterns that drastically affected their adult lives. A fascinating way to write a biography. –Lulu Publications

As a lifelong resident of Chicago I saw John Belushi, Chris Farley, and even the author Joe Guse perform around the city, and therefore found this book particularly interesting. There has certainly been some debate regarding Belushi’s story between the Bob Woodward version and the family’s version and this book provides another potential explanation that looks at childhood patterns. From what I know about Farley this book also seems to provide some accurate possible insights into his behavior that looks at factors such as his how his religious beliefs contributed to his guilt and shame. Great book and well worth reading if your interested in psychology and comedy and how the two are intermingled. –Comedy Central –This text refers to an out of print or unavailable edition of this title.

Joe Guse is a former Chicago comedian now working as a psychotherapist. Joe is the author of 9 books.

Dr. Joe Guse is a former comedian from the Pacific Northwest, who performed around Chicago for several years before deciding to go into psychology as a career. Joe made this seemingly odd transition after working as an entertainer in nursing homes, where he found that there was a very strong relationship between laughter, resilience, and healing. This relationship between laughter and mental health has been the crux of Joe’s work as a psychotherapist, and he has since written 19 books on various topics detailing his experiences integrating laughter into his work. Joe works in private practice in Chicago, and also does seminars around the country helping people explore the relationship between humor and mental health in their own lives. Joe holds 2 Master’s degrees in Human Development and Counseling Psychology, and a Doctorate in Clinical Psychology. He is a Clinical Psychologist licensed in Illinois, Washington, New Zealand, and Australia.