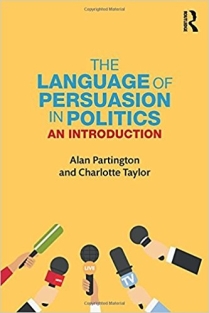 The Language of Persuasion in Politics

The Language of Persuasion in Politics: An Introduction 1st Edition

This accessible introductory textbook looks at the modern relationship between politicians, the press and the public through the language they employ, with extensive coverage of key topics including:

Extracts from speeches, soundbites, newspapers and blogs, interviews, press conferences, election slogans, social media and satires are used to provide the reader with the tools to discover the beliefs, character and hidden strategies of the would-be persuader, as well as the counter-strategies of their targets. This book demonstrates how the study of language use can help us appreciate, exploit and protect ourselves from the art of persuasion.

With a wide variety of practical examples on both recent issues and historically significant ones, every topic is complemented with guiding tasks, queries and exercises with keys and commentaries at the end of each unit. This is the ideal textbook for all introductory courses on language and politics, media language, rhetoric and persuasion, discourse studies and related areas.

Alan Partington is Professor of Political Linguistics at Bologna University, Italy. He is the author of Patterns and Meanings in Discourse (with Alison Duguid and Charlotte Taylor, 2013), The Linguistics of Laughter: A Corpus-Assisted Study of Laughter-talk at the White House (Routledge, 2007), Persuasion in Politics (with Charlotte Taylor, 2006) and The Linguistics of Political Argument (Routledge, 2003).

Charlotte Taylor lectures in English Language and Linguistics at the University of Sussex (UK) and is editor of CADAAD Journal. Her publications include Mock Politeness in English and Italian (2016), Patterns and Meanings in Discourse (with Alison Duguid and Alan Partington, 2013) and Persuasion in Politics (with Alan Partington, 2010).