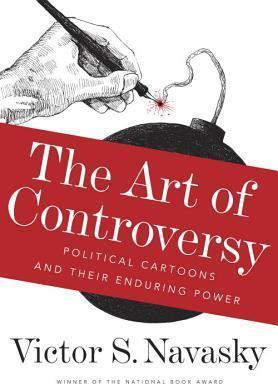 The Art of Controversy

The Art of Controversy
by Victor S. Navasky

“Mr. Navasky’s wonderful book is a spirited homage to the art and craft of political caricature, a genre that has brought down the mightiest of the mighty—but one that has also landed its practitioners in prison, or even put them under threat of death.” —The Wall Street Journal

A lavishly illustrated, witty, and original look at the awesome power of the political cartoon throughout history to enrage, provoke, and amuse. As a former editor of The New York Times Magazine and the longtime editor of The Nation, Victor S. Navasky knows just how transformative—and incendiary—cartoons can be.

Navasky guides readers through some of the greatest cartoons ever created, including those by George Grosz, David Levine, Herblock, Honoré Daumier, and Ralph Steadman.  He recounts how cartoonists and caricaturists have been censored, threatened, incarcerated, and even murdered for their art, and asks what makes this art form so uniquely poised to affect us. Drawing on his own encounters with would-be censors, interviews with cartoonists, and historical archives across the globe, Navasky examines the political cartoon as both art and polemic over the centuries, brilliantly illuminating the true power of one of our most enduringly vital forms of artistic expression.

“This heavily illustrated, entertainingly written look at political cartoons is both personal—Navasky’s experience with controversial drawing as well as writing is considerable—and thoroughly researched. It is also deeply insightful.” —Booklist

“A lavishly illustrated, witty, and learned look at the power of the political cartoon throughout history.” —Publisher’s Weekly

“Navasky argues eloquently and convincingly [that] censorship of caricature artists amounts to an assault on individual free speech. The Art of Controversy is an amazing historical document from a political journalist all too familiar with caricature’s intuitive and divisive power.” —Shelf Awareness

“A novel approach to the history of political cartoons. From Picasso, Grosz, and Daumier through Herblock and Ralph Steadman, Navasky illuminates an underappreciated art form.” —Oliver Stone

“As Victor Navasky, a word man, investigates the wordless art of the political cartoon — what, he asks, accounts for its implosive power? — we find ourselves in the hands of a writer of indefatigable curiosity and are caught up in the tempestuous history of newsprint art. An expansive, illuminating work. I know of nothing comparable.” —E.L. Doctorow

“An entertaining and instructive reminder of the important place of political cartoons in exposing lies, hypocrisies, stupidity, and corruption in the public arena. Be prepared to laugh and get angry all at once.” —Tom Brokaw

“Victor Navasky pulls it off – he showcases the significance and power of political cartoons without taking the ‘funny’ out of them or cloistering the amazing rage they evoke that is far beyond the power of mere words to explain.” —Ralph Nader

“For the political junkie, journalist, artist, cartoonist or student, The Art of Controversy is a wonder story of an amazing art form.” —New York Journal of Books

Victor S. Navasky
Victor S. Navasky has served as editor, publisher and now publisher emeritus of The Nation, which he joined in 1978. He is also the George Delacorte Professor of Magazine Journalism at the Columbia University’s Graduate School of Journalism, where he directs the Delacorte Center of Magazines and chairs the Columbia Journalism Review. In the 1970’s he served as an editor on The New York Times Magazine. In the 1960’s he was founding editor and publisher of Monocle, a “leisurely quarterly of political satire” (that meant it came out twice a year). His books include Kennedy Justice, Naming Names which won a National Book Award, and (with Christopher Cerf) The Experts Speak: The Definitive Guide to Authoritative Misinformation and also Mission Accomplished! Or How We Won the War In Iraq, A Matter of Opinion, which won the 2005 George Polk Book Award and the 2006 Ann M. Sperber Prize, and of which The New York Times wrote, “Anybody who has ever dreamed of starting a magazine, or worried that the country is losing the ability to speak seriously to itself, should read A Matter of Opinion…”. Mr. Navasky is a member of the American Academy of Arts and Sciences. Most recently he has published The Art of Making Magazines: On Being an Editor and Other Views for the Industry edited by Victor S. Navasky and Evan Cornog, and The Art of Controversy: Political Cartoons and Their Enduring Power (Knopf, 2013).