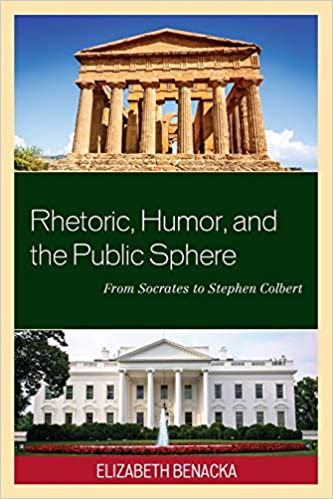 Rhetoric, Humor, and the Public Sphere

Rhetoric, Humor, and the Public Sphere: From Socrates to Stephen Colbert

by Elizabeth Benacka (Author)
Rhetoric, Humor, and the Public Sphere: From Socrates to Stephen Colbert investigates classical and contemporary understandings of satire, parody, and irony, and how these genres function within a deliberative democracy. Elizabeth Benacka examines the rhetorical history, theorization, and practice of humor spanning from ancient Greece and Rome to the contemporary United States. In particular, this book focuses on the contemporary work of Stephen Colbert and his parody of a conservative media pundit, analyzing how his humor took place in front of an uninitiated audience and ridiculed a variety of problems and controversies threatening American democracy. Ultimately, Benacka emphasizes the importance of humor as a discourse capable of calling forth a group of engaged citizens and a source of civic education in contemporary society.

In this analysis, Benacka (Lake Forest College) offers a broad view of the rhetoric of humor. In six chapters, the author broadly covers the history of humor and the history and practice of humor in the US, and specifically offers a case study of the public rhetoric of satirist Stephen Colbert. Colbert’s uses of parody, irony, and satire in such contexts as his performance at a 2006 White House Correspondents’ Dinner, his testimony in 2010 to the Judiciary Committee’s Subcommittee on Immigration, Refugees, and Border Security, and his 2012 Super PAC “Americans for a Better Tomorrow, Tomorrow” are examined. A concluding chapter establishes how Colbert’s humor advances national conversations by calling attention to the dysfunction of politicians and the media. Several books about Colbert’s influence have been written, such as Chad Summers’s Stephen Colbert: From Fake News To Real Comedy (Rounders, 2015), but none has examined Colbert’s influence from an academic perspective that explores the history of humor. This book would serve as a fine supplemental text in courses about persuasion, political communication, and pop culture. Summing Up: Recommended. Upper-division undergraduates through faculty. ― CHOICE

In Rhetoric, Humor, and the Public Sphere, Benacka offers a unique vantage point to consider one of the great satirists of our times. Taking us beyond the television screen, she deftly employs a rich body of rhetorical theory to examine Stephen Colbert’s remarkable forays into the public sphere. She makes a compelling case that Colbert’s intersections with real political institutions represent both a daring kind of political art and an innovative – and much needed — form of civic education. — Geoffrey Baym, Temple University

In her insightful book, Dr. Benacka explores the relevance of classical rhetorical theory for understanding the role played by satire, parody and irony in 21st century U.S. public culture. Her examination of Stephen Colbert’s years-long performance as a right-wing ideologue makes a strong case for the important role these rhetorical techniques play in an increasingly fragmented public realm. Her focus on moments when Colbert’s character moved out of the studio and into the world reveals much about the fractured nature of our public spaces and about the symbiotic relationship between political leaders and media elites in the early 21st century. — Mark A. Pollock, Loyola University Chicago

Elizabeth Benacka is assistant professor in the Department of Communication at Lake Forest College.