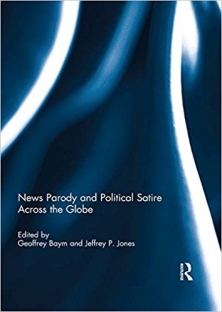 News Parody and Political Satire Across the Globe 1st Edition

In recent years, the US fake news program The Daily Show with Jon Stewart has become a surprisingly important source of information, conversation, and commentary about public affairs. Perhaps more surprisingly, so-called ‘fake news’ is now a truly global phenomenon, with various forms of news parody and political satire programming appearing throughout the world.

This collection of innovative chapters takes a close and critical look at global news parody from a wide range of countries including the USA and the UK, Italy and France, Hungary and Romania, Israel and Palestine, Iran and India, Australia, Germany, and Denmark. Traversing a range of national cultures, political systems, and programming forms, News Parody and Political Satire Across the Globe offers insight into the central and perhaps controversial role that news parody has come to play in the world, and explores the multiple forces that enable and constrain its performance. It will help readers to better understand the intersections of journalism, politics, and comedy as they take shape across the globe in a variety of political and media systems.

This book was originally published as a special issue of the journal Popular Communication.

‘In addition to its transnational focus, the collection is also commendable for not suffering from the theory-ridden dryness that accompanies much scholarship on comedy and for sustaining a high quality of scholarship throughout.’ Perin Gürel, Journal of American Studies of Turkey

Geoffrey Baym is Associate Professor of Media Studies at the University of North Carolina-Greensboro, USA. He is the author of From Cronkite to Colbert: The Evolution of Broadcast News (2010) and numerous articles and book chapters on the changing nature of news media and political discourse.

Jeffrey P. Jones is Director of the Institute of Humanities at Old Dominion University, USA. The author of Entertaining Politics: Satiric Television and Political Engagement, 2nd edition (2010), he is also co-editor of Satire TV: Politics and Comedy in the Post-Network Era (2009) and The Essential HBO Reader (2008).