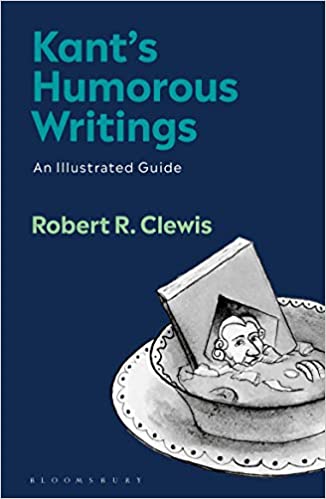 While Kant is commonly regarded as one of the most austere philosophers of all time, this book provides quite a different perspective of the founder of transcendental philosophy. Kant is often thought of as being boring, methodical, and humorless. Yet the thirty jokes and anecdotes collected and illustrated here for the first time reveal a man and a thinker who was deeply interested in how humor and laughter shape how we think, feel, and communicate with fellow human beings.

In addition to a foreword on Kant’s theory of humor by Noël Carroll as well as Clewis’s informative chapters, Kant’s Humorous Writings contains new translations of Kant’s jokes, quips, and anecdotes. Each of the thirty excerpts is illustrated and supplemented by historical commentaries which explain their significance.

“For many readers, ‘Kant’ and ‘humor’ are two words that do not belong together in the same sentence. But in his detailed and engaging study, Robert Clewis gives the lie to this popular prejudice. The sage of Königsberg was both a fairly serious theorist of humor as well as a teacher who often sought to enliven his lectures with a good joke or two.” ―Robert B. Louden, Distinguished Professor and Professor of Philosophy, University of Southern Maine, USA

“Kant scholarship meets humor research-what a delightful surprise! Drawing on Kant’s writings and notes taken by his students, Clewis evaluates thirty of Kant’s jokes, stories, and observations to discuss his philosophy of humor. Along the way, he gets into what’s wrong with bad puns and why the English are better at comedy than the French. His treatment of Kant’s ethics of humor and his understanding of it as an aesthetic experience are especially insightful. I’ve been researching humor for forty years and found new ideas in every chapter.” ―John Morreall, author of “Taking Laughter Seriously” and “Comic Relief: A Comprehensive Philosophy of Humor”

Robert R. Clewis teaches philosophy and is Associate Director of the Honors Program at Gwynedd Mercy University, USA. He is author of The Kantian Sublime and the Revelation of Freedom (2009), a translator in Kant’s Lectures on Anthropology (2012), and editor of Reading Kant’s Lectures (2015) and The Sublime Reader (Bloomsbury, 2019).