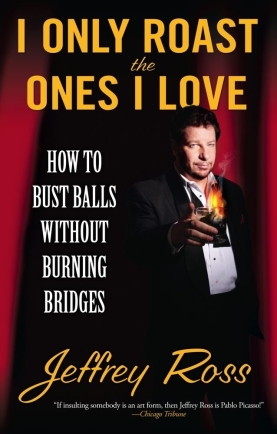 I Only Roast the Ones I Love

I Only Roast the Ones I Love: How to Bust Balls Without Burning Bridges Paperback – June 1, 2010

One of the world’s foremost practitioners of insult comedy, Jeffrey Ross has memorably and uproariously roasted some of our favorite celebrities. Part memoir and part how-to guide, I Only Roast the Ones I Love unveils the irreverent secrets every successful roastmaster should know, such as how to:

• Turn any event into a roast your friends will never forget

• Rip your honoree a new one without hurting their feelings

• Save yourself if you bomb

• Prepare yourself to take a punch

• Give toasts at family gatherings

• Save lives through roasting

Jeff’s hilarious and poignant stories feature everyone from Dave Chappelle and Courtney Love to Tom Cruise and Bea Arthur and take readers backstage for unforgettable roasts of stars like Pamela Anderson, Flavor Flav, William Shatner, Shaquille O’Neal, Larry the Cable Guy, Bob Saget, and even the finalists of Dancing with the Stars. Most of all, Jeff’s teachings will inspire you to channel your own inner roastmaster.

“I’ve cooked a few meals in my day, but trust me, nobody knows how to cook someone’s goose like Jeffrey Ross. He will teach you how to baste and bake all of your family and friends until every relationship is burnt beyond recognition. Ross is a flame-thrower at both ends.” — Rachael Ray

“”I Only Roast the Ones I Love” is Jeff Ross’s most insulting work yet. An indispensable guideto making certain everyone you know hates you. Very, very funny. Jeff’s writing is the reason I learned to read.” — Jimmy Kimmel

“If insulting somebody is an art form, then Jeffrey Ross is Pablo Picasso!” — “Chicago Tribune”

“Jeffrey Ross has a face for books, and I’m glad he’s finally come to terms with that.” — Chelsea Handler

“Don’t judge this book by its cover just because Jeff’s face is on it.” — Sarah Silverman

“”I Only Roast the Ones I Love” is one of the funniest, most compelling, touching, and controversial books I’ve ever read. If you love the art of people onstage saying funny insults that make your whole life’s work seems like a bunch of crap, then this is the book for you.” — Chris Rock

“When Jeff asked me to give a quote for his book, my first thought was to get Jeff Ross to write it. He’s incredibly funny and I’m incredibly busy.” — John Mayer

“Do yourself a favor…get Jeff’s book, curl up next to the fireplace…and throw it in.” — Bob Saget

Jeffrey Ross is the current New York Friars’ Club Roastmaster General and was a roaster for Comedy Central’s Roast of Pamela Anderson in 2005. Ross has appeared on television shows, such as The Late Show with David Letterman, The Tonight Show with Jay Leno, Late Night with Conan O’Brien, and many others. He’s also a regular on The Opie and Anthony Show and has also appeared on HBO’s Six Feet Under and Showtime’s Weeds. In film, he has appeared in Stuck on You and The Aristocrats. His first hour-long Comedy Central special No Offense: Life from New Jersey aired August 2008. Jeffrey Ross, the meanest man in comedy and “one man verbal assault unit” (MTV), offers anecdotes and deconstructs the makings of a great roast—based on his own career as the Friars’ Club Roastmaster General.