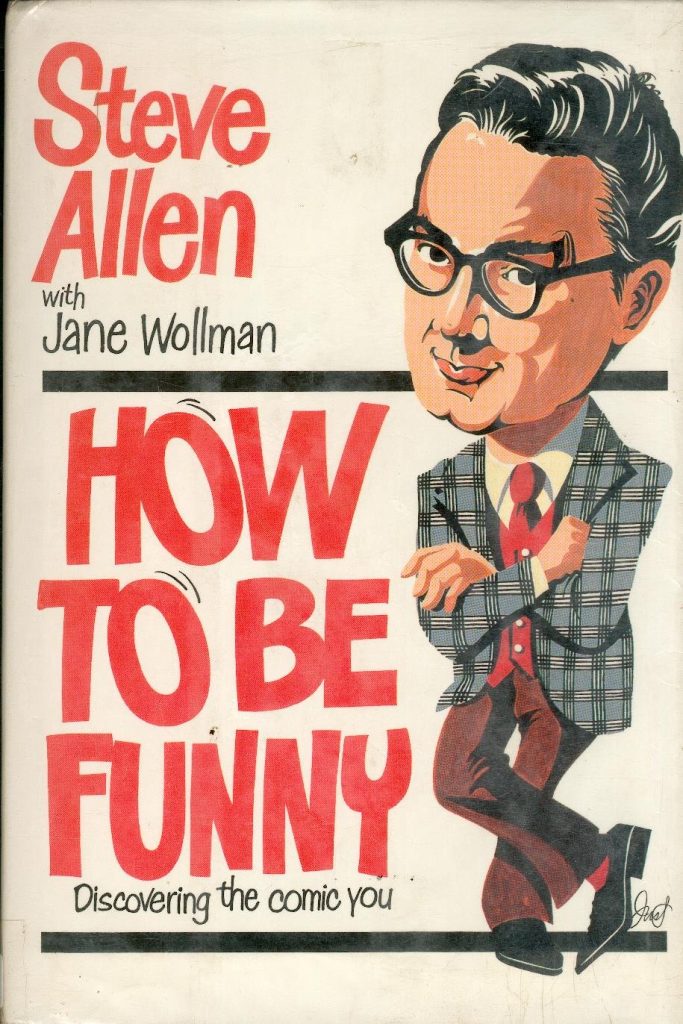 How to be Funny

No one knows more about comedy than Steve Allen. For more than five decades as a writer, performer, and keen observer of the social scene, he has looked into every aspect of who’s funny, what’s funny, and why. Allen shares his discoveries in How to Be Funny, the book designed to help everyone develop their special talent for funniness.

Now reissued in paperback, How to Be Funny covers all the basics, including joke telling, ad-libbing, writing humorously, performing comedy, emceeing, and much more. Allen takes you inside the world of comedy, from the early writings of Mark Twain, to the more contemporary work of Rodney Dangerfield and Bill Maher. Allen even provides homework assignments for the budding comic!

Yet How to Be Funny is far more than just a book for aspiring comedians it will help anyone who wants to be a more amusing conversationalist, a more effective public speaker, and everyone who just wants to be the life of the party.

Steve Allen (Los Angeles, CA) is the creator of the “Tonight Show” and PBS’s award-winning program “Meeting of the Minds.” He is the author of many books on a wide range of topics for both children and adults. Jane Wollman (New York, NY) is a journalist who has written regularly for The New York Times, Newsday, and USA Today.

Steve Allen
Steve Allen didn’t just decide to be a comedian, he was destined to become one. Steve’s parents were the vaudevillian comedy team of Montrose and Allen. He credits his mother, Belle Montrose, for his funny bone.  Milton Berle called her “the funniest woman in vaudeville.”

Steve was a pushover for comedy.  He loved to write it, act it and watch it.  Some 92 percent of today’s comedians broke him up.  He worried why he didn’t laugh at the remaining eight percent.

For years he was known as one of the greatest ad-lib specialists in the business, taking advantage of situations as they come up and getting laughs out of them.
Steve Allen, Comedian.

Hundreds of his off-the-cuff one-liners are legendary.   Announcing the final score of a big game between Harvard and William and Mary, it came out: “Harvard 14, William 12, Mary 6.”  When someone in the studio audience once asked him, “Do they get your program in Boston?”, he quipped, “They see it, but they don’t get it!”

A psychologist — interviewed on an Allen show — announced that the only two instinctive fears in man are the fear of loud noises and the fear of falling.   “I have a great fear,” replied Steve, without missing a beat, “of making a loud noise while falling.”

“When I ad-lib something, I laugh,” Allen was quoted.   “I laugh for the same reasons the audience does;  I’ve never heard that joke before — and I’m just as surprised as they are.”

For nearly 50 years he distinguished himself in the spontaneous creation of humor in front of audiences.   The first telecast of the American Comedy Awards presented their Lifetime Achievement Awards to only five American comedians:  Steve Allen, Woody Allen, Mel Brooks, Sid Caesar and Jonathan Winters.

Allen has also been referred to as “the most imitated man on television.”  He was the first comedian to do funny and totally ad-libbed interviews with studio audiences or on the street, originated the Question Man in which the answer comes before the question, originated the idea of taking close-up pictures of people in his audience and building a comedy routine around them, and was the first comic to regularly do crazy and sometimes dangerous physical stunts on his shows.