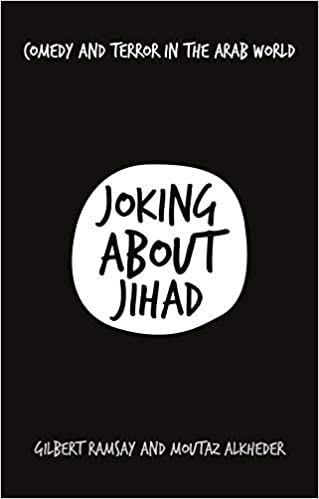 Joking About Jihad: Comedy and Terror in the Arab World Paperback – September 1, 2020

Can laughter really be used to undermine the appeal of terrorist groups? And should it be? Is there any truth in the stereotypical notions of fanaticism as humorless, and of humor as the antithesis of fanaticism? What is the deeper significance of the jihadi’s status as an object of mockery in
Arabic popular culture?
Joking About Jihad explores this thicket of problems sprouting from one of the most basic–and supposedly most innocent–of human behaviors, and looks at how it has been applied to one of the least obviously laughable phenomena in the world today. Ramsay and Alkheder draw on original interviews and
hitherto unexamined texts, combining insights from fields as diverse as politics, psychology, cultural studies, Islamic studies and humor research. Examining apparently spontaneous joking, professional comedy and even the jokes told by jihadis themselves, they show how Salafi jihad has been made
laughable in the modern Arab world, and why it matters.

“A sharp and insightful reflection not only on the potential of humour in countering jihadi propaganda, but more generally on the impact of satire and derision in debunking oppressors’ lies in the Muslim world.”– Jean-Pierre Filiu, Professor of Middle East Studies, Sciences Po, Paris School of
International Affairs (PSIA)

“In this original and brave book, Ramsay and Alkheder put humour at the core of what seems appallingly humourless. Invoking a surprisingly wide spectrum of practitioners, they elegantly lay bare the disgust, ridicule, hypocrisy, self-doubt, subversion, and even humanising potential of satire when it
punctures taboo subjects.”– James Piscatori, Honorary Professor of Islamic Studies, Australian National University, and co-author of Islam Beyond Borders: The Umma in World Politics

Gilbert Ramsay is a lecturer at the University of St. Andrews Centre for the Study of Terrorism and Political Violence, and author of Jihadi Culture on the World Wide Web.

Moutaz Alkheder is a PhD candidate at the Centre, working on anti-jihadist rhetoric in Arabic television comedy.