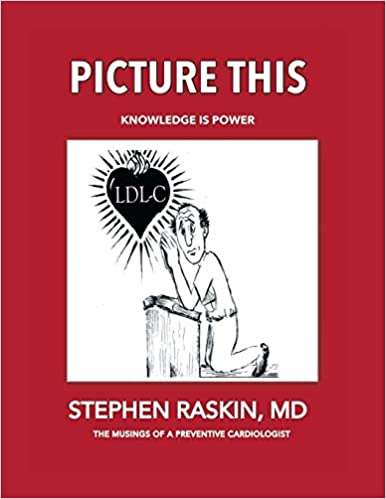 Ebook – Picture This: A Cartoon Anthology

Every 37 seconds an American dies of cardiovascular disease. For nearly half of its victims atherosclerotic cardiovascular disease shows up suddenly with a heart attack or sudden death – as if appearing out of a fog. This is the disease that kills most men and women in the United States and knowing about it earlier makes common sense.

Atherosclerosis starts silently in our teen years, and often tracks with poor lifestyle, and poorly controlled risk factors including poor nutrition, abnormal lipids, high BP, diabetes, tobacco use, sedentary behavior, and importantly, genetic predisposition. The development and progression of coronary atherosclerosis is a silent process and each year nearly 150,000 Americans present with fatal myocardial infarction as the one and only manifestation of this indolent disease.

It is obvious that our current methods to identify and treat atherosclerotic vascular disease fail too many.

Stephen Raskin, MD is currently the Director of the Sutter Eastbay Lipid Clinic in Oakland, California. He is a former Clinical Professor of Medicine, University of California, San Francisco, and mentor at the UC Berkeley-UC San Francisco Joint Medical School Program.

Dr. Raskin is a graduate of Queens College of the City University of New York where in addition to premedical training he served as the political cartoonist for the school newspaper. He graduated from the Medical College of Wisconsin and was elected to the National Honor Medical Society, Alpha Omega Alpha. He is a Fellow American College of Cardiology and holds Board certifications in Internal Medicine, Cardiovascular diseases, Cardiovascular Computed Tomography and Clinical Lipidology.

He enjoys travel photography and has been an avid sailor, completing two transpacific crossings. Dr. Raskin lives in Oakland with his wife Anne, and their feline, Nuzzie.

Dr. Raskin is a frequent invited lecturer on preventive cardiology.