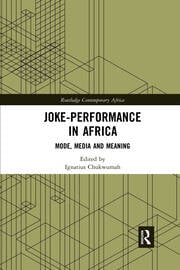 Jokes have always been part of African culture, but never have they been so blended with the strains and gains of the contemporary African world as today. Joke-Performance in Africa describes and analyses the diverse aesthetics, forms, and media of jokes and their performance and shows how African jokes embody the anxieties of the time and space in which they are enacted.

The book considers the pervasive phenomenon of jokes and their performance across Africa in such forms as local jests, street jokes, cartoons, mchongoano, ewhe-eje, stand-up comedy, internet sex jokes, and ‘comicast’ transmitted via modern technology media such as the TV, CDs, DVDs, the internet platforms of YouTube, Facebook, and other social arenas, as well as live performances. Countries represented are Egypt, Kenya, Malawi, Morocco, Nigeria, and Zambia, covering the North, West, East and Southern Africa. The book explores the description of the joke form from various perspectives, ranging from critical discourse analysis, interviews, humour theories, psychoanalysis, the postcolony and technauriture, to the interactive dramaturgy of joke-performances, irrespective of media and modes of performance.

Containing insightful contributions from leading African scholars, the book acquaints readers with detailed descriptions of the diverse aesthetics of contemporary African jokes, thereby contributing to the current understanding of joke-performance in Africa. It will appeal to students and scholars of African studies, popular culture, theatre, performance studies and literary studies.

This is not just another book about Africa. It is a splendid book by scholars who know this Africa that is often glossed over by the so-called experts. It is about the other Africa, ignored but unbowed. In one essay after the other, the eloquence of this Africa speaks to us across different media, asking us to rethink this Africa intimately and wisely. This is a rare collection of essays about joke and joking in Africa. No Africanist must do without it. Onookome Okome, University of Alberta, Canada