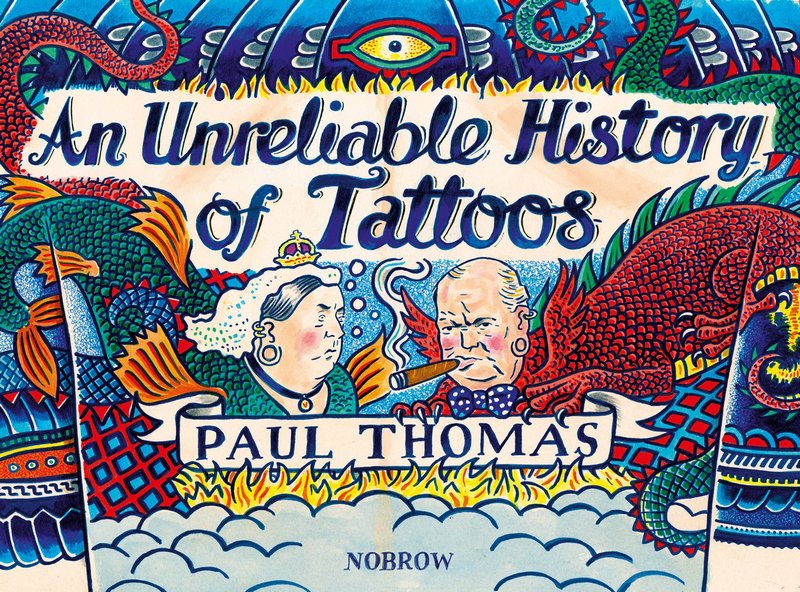 An Unreliable History of Tattoos

The tattoo is an art form, a practice . . . for some, a ritual. Its history is long and colorful, dating back to the Neolithic, when our ancestors marked their bodies with symbolic lines derived from a carbon paste. Today, those same markings can be made on entering the neon parlors that line our cities.Maybe it’s time to stop taking them so seriously.

Paul Thomas’s work has also appeared in the Sunday Times, the Times, the Independent, the Daily Telegraph, Private Eye, and Shares magazine. He has illustrated three books by Hunter Davies for Random House.

Editorial Reviews
Review
This history may not be true, but it sure does look great, and it’s a hell of a lot more fun than what actually transpired.
—The AV Club

The vibrant, full-color palette and drawing style frequently invoke old-school flesh art, and the author’s cartoonist background shines in the scathing caricatures of Western history’s most beloved and reviled figures. This picture book for grownups will please those who appreciate a heavy dose of mocking sarcasm with their social and political commentary.
—Booklist

No tattoo parlour should be without a copy – it’s just the thing to take your mind off the pain.
—The Telegraph
From the Back Cover

From the outlandish imagination of political cartoonist Paul Thomas comes a hilarious reimagining of the history of the tattoo!

Biography
Paul is a political, strip and gag cartoonist from the United Kingdom whose work has appeared in Punch magazine, The Spectator, Private Eye, The Sunday Times, The Independent, Daily Telegraph, The Guardian). As a comic illustrator his  cross-genre caricatures and location drawings have appeared on Channel 4 and Sky Television. An Unreliable History of Tattoos is his first book.