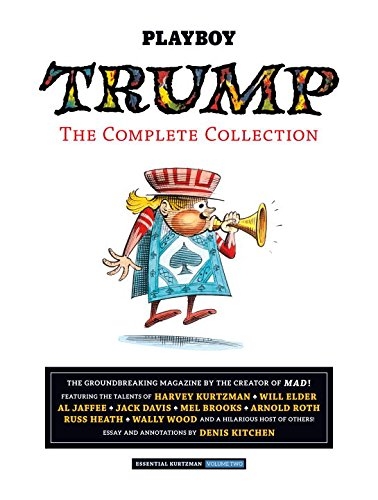 TRUMP was a lavish color satire magazine Harvey Kurtzman created for Hugh Hefner after leaving MAD magazine acrimoniously in 1956. With a star-studded cast (Mel Brooks, Will Elder, Jack Davis, Wally Wood, Al Jaffee) and Playboy’s money and clout, TRUMP should have been huge. But for complex financial reasons, Hefner pulled the plug while the third issue was in production. For six long decades, the legendary TRUMP has never been collected . . . until now. With never-before-seen art, including the surviving contents of ithe third issue, this long overdue collection will blow the minds of fans of Kurtzman, satire, and 1950s American pop culture.

Review
“I gave Harvey Kurtzman an unlimited budget at TRUMP, and he exceeded it.” -Hugh Hefner

About the Author
Harvey Kurtzman (1924-1993) was a cartoonist, writer, editor and comics genius. He is probably best remembered for MAD, which he founded in 1952. He created 28 revolutionary issues for E.C. publisher Bill Gaines (for whom he also created Two-Fisted Tales and Frontline Combat) with such talent as Will Elder, Jack Davis, and Wally Wood before leaving in 1956.
Kurtzman then created the short-lived satire magazine Trump for Playboy publisher Hugh Hefner in 1957. He followed with the comic-size Humbug in 1958, then Help! magazine. During his Help! tenure he discovered such diverse talent as Terry Gilliam, Gloria Steinem, Gilbert Shelton, and R. Crumb. In 1962 he and collaborator Will Elder began producing the long-running and elaborate Little Annie Fanny comic for Playboy. In the ’70s he became known as the “father-in-law of underground comix” for inspiring a new generation of media-bending cartoonists. He passed away in 1993.

A long time coming but certainly worth the wait. Reprinting the only two issues of the 1957 Trump, the background notes to what was in them and an interesting essay by Dennis Kitchen on the collaboration between Kurtzman and Hefner that made the magazine possible make this book a fascinating read.

On page eleven there’s a 1957 letter reproduced from Hefner to Kurtzman where Hefner mentions some Jack Davis cartoons and how he would like future artwork to be a bit more sophisticated and not so action comic like and it seems that Hefner, according to an interview with Bill Schelly in 2007, possibly thought this about the first two issues of Trump…”I did not see it coming together in a way that looked as if it would be successful.” Did he think this because Kurtzman was basically a comic book editor rather than an upmarket humor magazine editor? Maybe Hefner’s thoughts were colored by a memo from Playboy’s Art Director Arthur Paul who it seems was none too impressed with the look of the first issue. I think he has a point because both issues are rather uneven regarding the content and layout, in particular too many visually strong articles start on a right-hand page rather than opening powerfully on a spread and there is a lot of comic art and cartoons.

I prefer the second issue to the first, more four-color pages (twenty) than the first (seventeen) and some great material including stunning color frames from Jack Davis based on the movie Giant, Sports Illustrated satire with a cover featuring the first head-on photo of a bullet, food photographs and four excellent spoof ads for the Container Corporation of America, Camel cigarettes, Canadian Club and Lipton tea. As a sort of bonus there are several pages devoted to the unpublished material for issue three though some of this ended up in Kurtzman’s next magazine Humbug.

It’s a lovely book though I have a couple of criticisms, the reproductions of Trump are just a bit smaller than the real thing (by about quarter of an inch) and it would have helped if the pages had a very thin grey line round them defining the Trump page on the larger book’s page.

This is a celebration of Harvey Kurtzman’s best work and if Hefner had deeper pockets it might have succeeded, least until the National Lampoon came along in the early seventies.